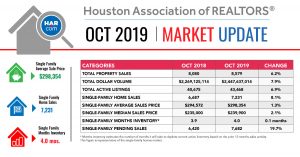 HOUSTON — (November 13, 2019) — Continued low mortgage interest rates kept consumers in a buying mood in October, powering home sales to a fourth consecutive positive month. According to the latest monthly report from the Houston Association of Realtors (HAR), sales of single-family homes across the greater Houston area totaled 7,231 in October. That is up 8.1 percent compared to a year earlier. On a year-to-date basis, home sales are 4.2 percent ahead of 2018’s record volume, making it ever more likely that 2019 will establish a new record for local real estate.
Homes priced between $500,000 and $750,000 led the way in sales, climbing 13.0 percent versus October 2018. That segment was followed closely by homes in the $250,000 to $500,000 range, which rose 12.9 percent. The luxury segment, which is made up of homes priced from $750,000 and above, was unchanged year-over-year.
Single-family home prices set new October highs. The median price (the figure at which half of the homes sold for more and half sold for less) increased 2.1 percent to $239,900 while the average price rose 1.3 percent to $298,354. Despite the record prices, the increases are among the smallest of 2019 and reflect signs of pricing moderation as the year draws to a close.
In addition to the incentive that lower mortgage rates create, buyers benefited from a slightly larger supply of homes on the market with housing inventory up to a 4.0-months supply in October versus 3.9 months in 2018. So far this year, the peak inventory was reached in June and July when it grew to a 4.3-months supply.
Sales of all property types climbed 6.2 percent in October, totaling 8,579 units. Total dollar volume rose 7.9 percent to $2.4 billion.
“Consumers continue to take advantage of attractive buying conditions, between low interest rates, a healthy supply of homes on the market and a strong overall Houston economy,” said HAR Chair Shannon Cobb Evans with Better Homes and Gardens Real Estate Gary Greene. “Interest rates are currently forecast to remain low into the new year, so it’s possible that we get through the holidays without too much of a seasonal slowdown in home sales, but we’ll just have to see how things go.”
The 30-year fixed mortgage rate fell slightly to 3.69 percent the week ending November 7, approaching levels last seen in November 2016, according to figures released by Freddie Mac. It was 3.78 percent the prior week and 4.94 percent a year ago.
Lease Property Update
Lease properties staged a mixed performance in October. Single-family home leases rose 2.4 percent while leases of townhomes and condominiums fell 15.2 percent. The average rent for single-family homes increased 2.3 percent to $1,795 while the average rent for townhomes and condominiums was unchanged at $1,543.
October Monthly Market Comparison
The Houston real estate market registered across-the-board gains in October. Single-family home sales, total property sales, pricing, total dollar volume and inventory all increased compared to October 2018. Month-end pending sales of single-family homes totaled 7,682. That represents a 19.7 percent increase over last year. Total active listings, or the total number of available properties, rose 6.9 percent to 43,468.

The October inventory of single-family homes grew slightly to a 4.0-months supply compared to 3.9 months a year earlier. However, it is below the 2019 peak of 4.3-months reached over the summer, in June and July. For perspective, housing inventory across the United States currently stands at a 4.1-months supply, according to the latest report from the National Association of Realtors (NAR).
Single-Family Homes Update
October was the fourth consecutive positive month of single-family home sales, with 7,231 units sold across greater Houston compared to 6,687 a year earlier. That represents an 8.1 percent increase. On a year-to-date basis, sales are running 4.2 percent ahead of 2018’s record pace.
Home prices climbed to the highest levels ever for an October. The median price was $239,900, up 2.1 percent from one year prior. The average price rose 1.3 percent to $298,354. Despite that, the increases are among the smallest of 2019 and reflect possible pricing moderation as the year winds down. Days on Market (DOM), or the number of days it took the average home to sell, was 59 compared to 58 a year ago. Inventory expanded to a 4.0-months supply. That is up from 3.9 months year-over-year and is slightly below the 2019 peak of 4.3 months reached in June and July. The national inventory stands at 4.1 months, according to NAR. Broken out by housing segment, October single-family sales performed as follows:
HAR also breaks out sales activity for just existing single-family homes. Existing home sales totaled 5,837 in October. That is up 7.0 percent versus the same month last year. The average sales price rose 1.5 percent to $286,395 while the median sales price increased 2.7 percent to $226,000.
Townhouse/Condominium Update
The townhouse and condominium segment has been on a roller coaster ride throughout 2019, with alternating months of up and down sales. After an 8.2 percent year-over-year rise in September, sales fell 3.2 percent in October with 510 units sold compared to 527 in October 2018. The average price dropped 5.2 percent to $199,045 while the median price rose 6.8 percent to $164,500. Inventory expanded from a 4.3-months supply to 4.7 months.

[Article credit to the Houston Association of REALTORS®]