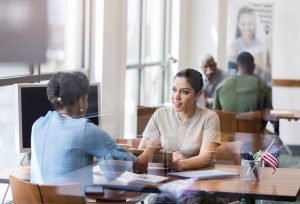 Veterans make up a crucial portion of the U.S. population and labor force. Data from the Bureau of Labor Statistics point to 19.2 million men and women across the country who were veterans in 2018, accounting for about 8% of the adult population.

But going from military to civilian life isn’t always seamless for the nearly 200,000 service members who make the transition every year. Veterans still face disadvantages when applying for jobs after returning home, despite being more educated, experienced and loyal than their civilian peers, according to a Veteran Opportunity Report from LinkedIn.

However, some companies lead the pack in their outreach to employ and advance veterans in their post-military careers. Online job engine Indeed analyzed over 200 million employee reviews on its site to find the top-rated companies that provide the best jobs and benefits for veterans.

Keller Williams Realty took the top spot for the second year in a row, thanks in part to its overall praise for workplace culture and commitment to work-life balance. The real estate company actively recruits veterans and has a dedicated application page that outlines the entrepreneurial and leadership qualities that former service members often bring to the workplace. Employee reviews also highlight the company’s commitment to training and opportunities for advancement.

While Keller Williams Realty, which has 700 global offices, takes the No. 1 spot, other top-rated employers tend to fall into government and defense industries.

This isn’t surprising, considering the sectors that tend to employ more veterans include defense and space, utilities and government administration, according to the LinkedIn report. Veterans are most likely to have college degrees that focus on computer and information systems security, organizational leadership, criminal justice, police science and human resources.

Veterans who join the second-ranked Federal Bureau of Investigation (FBI) may be well suited to become special agents. Applicants generally have to be younger than age 37 to become a special agent, but preference-eligible veterans can join after the age cut-off, though every agent must have a bachelor’s degree. Training kicks off at the FBI Academy with tests in physical fitness, defensive tactics, practical application exercises and use of firearms.

Rounding out the top three, global defense contractor Northrop Grumman says 20% of its workforce is veterans. The company has dedicated recruiting programs such as Hiring Our Heroes, and veterans with previous military clearance have an advantage in working and advancing within the company.

Here are the top companies that promote veteran careers through jobs, pay, benefits and opportunity.